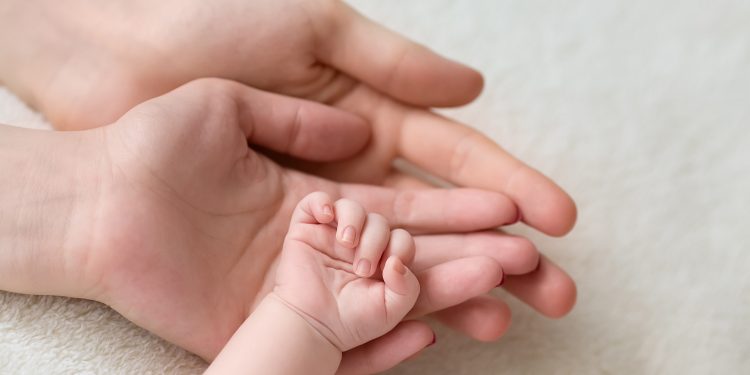 When expectant mother Erica Willenbring began feeling discomfort, she really didn’t think anything of it. After all, she was 20 weeks pregnant with triplets and three growing babies were sharing the limited real estate of her torso with her stomach, bladder, and spleen.

But discomfort soon led to pain and pain led to bleeding, so Erica and her husband, Aaron, left their daughter Sydney with her parents and hurried to the hospital.

“I remember thinking to myself, I’m going to be on bedrest for such a long time and it’s going to be so hard,” Erica said. “Never in my mind did I think I was ever going home, not pregnant.”

Though she had previously been experiencing an ideal pregnancy for multiples – each had their own amniotic sac and placenta – Erica was shocked and devastated to learn she was in labor; almost 5 months early and, despite their efforts, there was nothing doctors could do to stop the progression.

Fallon, Ruby, and Jack Willenbring were born late in the evening of January 6th, 2014. Each were born alive and Erica and Aaron were escorted, with their children, to the anti-partum room; a separate section of the ward designed to shield grieving parents from the sound of crying, healthy newborns.

The room was bitterly cold and, in her grief, shock, and exhaustive confusion, Erica obsessively wondered if the air conditioning was broken or if she was experiencing symptoms of shock from her recent deliveries. It was in that freezing room that Erica and Aaron spent only a few precious hours with their babies.

“At 20 weeks, they don’t even give medical intervention or anything,” Erica recalled, through tears. “You pretty much just hold them until their little hearts go out.”

At the time, Erica and Aaron had only recently moved to Boise, Idaho from Temecula, California. And, just hours after the loss of their babies, the grieving couple found themselves forced to make one of the toughest decisions of their lives.

“I remember a social worker came in and asked where we wanted to bury our children,” Erica said. “We’d only lived there two months and I didn’t even know how to get around the f-ing area, let alone somewhere to bury my children.”

Time slowly passed for Erica and, after six months of being crippled by grief, fear, and anxiety, she and her husband decided to try for another child, as they had always wanted their daughter to experience the joy and memories of having siblings in her life.

They soon became pregnant with their son, Axel, and, despite the fact that both he and his big sister were healthy and okay, the post-traumatic stress of losing her babies was still weighing heavily on Erica’s heart; grappling with the grief of losing her children as well as the guilt of bringing another child into the world. Though she logically knew she wasn’t trying to replace the triplets with another child, the guilt was still there and Erica knew it probably always would be.

When Axel was about nine months old, Erica saw the future in a different light and made the courageous decision to live again.

“I just decided I could not be sad all the time. My children deserve better and my marriage deserves better,” she said. “I decided that, instead of grieving the triplets, I was going to celebrate their existence. I decided to honor them in a way that brings smiles instead of tears.”

From that moment on, Erica’s mission has been to help parents and families dealing with the same tragedy as she and Aaron had; the goal of somehow bringing a sense of peace to a time of unimaginable heartbreak.

After some research into how she could help, Erica started the Little Joys Remembrance Foundation; a non-profit organization that not only sponsors events and opportunities for families to celebrate the infants they lost but also gives grieving parents the most precious gift of all, more time with their child.

Flashing back to her time in the freezing cold anti-partum room, Erica discovered Cuddle Cots, a revolutionary infant body cooling system which was developed in the United Kingdom and brought to the U.S. in 2013. Disguised as a simple baby basket, the Cuddle Cot helps to lower the body temperature of a stillborn or infant who dies shortly after birth; slowing the natural deterioration of the body and allowing the parents, and their loved ones, more time to spend with the child.

The focus of Little Joys Remembrance Foundation became the funding and donation of Cuddle Cots for local hospitals. In her pursuit, Erica reached out to Christina Babin, Health and Parent Educator and Perinatal Bereavement Coordinator for Saint Alphonsus Family Center in Boise.

“Cuddle Cots are a tangible tool hospitals can use to show respect once a baby has died. It shows parents we value the time they have to say hello and goodbye,” Babin said. “We have had the opportunity to use the Cuddle Cot in our hospital and I personally saw the impact it made. Parents feel more in control when they are given choices in a very out of control and shocking situation. While we cannot fix the situation for them, we can let them know they are supported and cared for.”

Cuddle Cots allow for parents to make memories they may not normally have the time to make, including dressing, snuggling, and taking family photos with their child. The Cuddle Cot also allows loved ones who may want to say their good byes, but live further away from the hospital, to make the trip.

Felicia Ottley, a supporter of Little Joys, lost her son, Kyler, at 39 weeks. At that time, her hospital was not equipped with a Cuddle Cot.

“Up to that point, I hadn’t really experienced loss,” Ottley said. “I still really thought that, if you played by the rules and did everything right, things would work out. I was shocked, devastated, broken, and had my innocence ripped away from me. I was scared for the future, for myself, and for my marriage. It all seemed pretty bleak.”

Though nothing could take away the pain from such unexpected and devastating loss, Ottley acknowledges the benefits a Cuddle Cot could provide to families.

“We didn’t have a Cuddle Cot available to us, but I think that it would have helped us make more memories with him if it had been,” she said. “One of my bigger regrets with him is that we never dressed him. I think we would have, if he had been available to us more. He was sent to the morgue soon after he was born. We were able to have him brought to our room for short periods of time but we always had to send him back.” 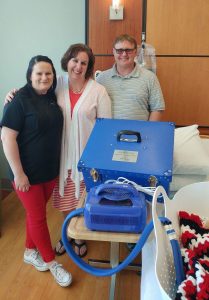 Willenbring (left) with Jana and Jeff Hahn, who donated in memory of their son, Carson Paul.

Erica was determined to help mothers like Felicia but, being new to Boise with few social connections, fundraising for Little Joys was an uphill battle. Upon hearing Erica’s story, her friend and former neighbor in California, Sean McCoy, chose to help kickstart the foundation by funding a Cuddle Cot on his own.

“Having premature twins of my own and landing in the NICU for four weeks, until they were able to gain strength and weight, I was exposed to many family success stories and some that were not as fortunate,” McCoy said. “It’s true what they say when having children. It is life changing and, within the first few minutes of their birth, I was a different person. I decided to be a donor so that other families could extend their experience with their children, if even for just a few hours.”

Since their inception, the Little Joys Remembrance Foundation has funded five Cuddle Cot cooling systems, at a price of $2,764 each, to Idaho hospitals as well as two of the accompanying bassinets, called Moba Baskets, to facilities with the cooling device already in house.

But there are still 26 hospitals in the state of Idaho who do not have Cuddle Cots available to their patients, so Little Joys Remembrance Foundation has their work cut out for them. Together with the non-profit, Stories of Babies Born Still, or S.O.B.B.S., Erica hopes that, one day, every hospital in the country will have the ability to offer grieving families more time to say good bye. Until then, her heart is with those still finding the strength to carry on after such a tremendous, life-altering loss.

“It took me a good two years to, as I say, put air back in my lungs, but there’s no expectation of anyone who just found out their baby is gone,” Erica said. “Whether you are grieving in the depths for one year or five years, that’s your journey and that’s what you need to get through each day. The ultimate thing I want to express to families is that you can survive. I’d like to tell them that, if all they do each day is wake up and breathe, that’s enough.”

To donate to Little Joys Remembrance Foundation and help give precious time back to grieving families through the purchase of Cuddle Cots, please do so online at https://www.paypal.me/littlejoysidaho. Even the smallest amount can make a big difference.